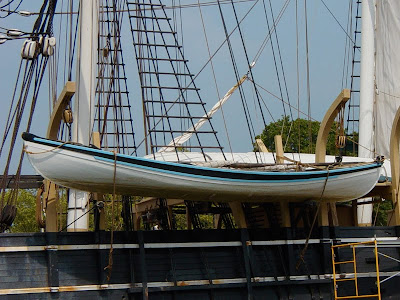 Whaleboat in davits on the CW Morgan, Mystic Seaport 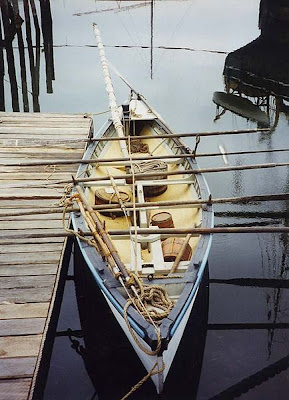 Whaleboat exhibit at Chubb's Wharf at Mystic. This boat came to Mystic in 1941 aboard the CW Morgan but is believed to have been built before 1920. It is fully kitted out with whaling gear representative of the 1880's. 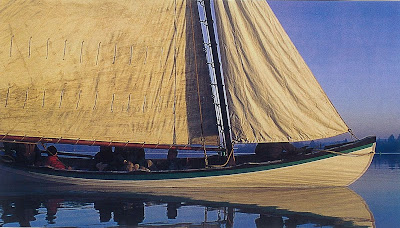 Newly minted (2003) whaleboat built at Mystic by a team headed by Walter and Willits Ansel.
Willits came out of retirement for this boat, to build 'one more', the project manager being his son Walter. Tom Jackson was a member of the team and wrote an article for WoodenBoat which is must read.


Long and lean, fast and graceful, the brutality of the whaleboat as an eloquently evolved weapon is belied by the elegance of their lines. Light, efficient and lethal. These are the boats that were employed by whaling ships to close the end game. They are an example of the evolution of form in service to function that has resulted in sheer artistry born of utility.
The last traditional whaleboat built in this country was built in 1933 by the beetle Mfg. Co. of New Bedford MA. for the Maritime Museum in Newport News. The boats had long been built by Beetle and they supplied much of the American whaling industry. The legacy of American whaleboats has been kept alive by Mystic Seaport and in particular Willits Ansel who, while serving as a shipwright at Mystic initiated the the building of whaleboats there. He also 'wrote the book' on whaleboats. I cannot explain the crazy price for the book at Amazon right now, I recently ordered the book for around $35. Take a look also at Tom Jackson's article on Willits and his son Walter building a whaleboat at Mystic featured in WoodenBoat #171. The boats we will be following here are being built to plans from Mystic, I believe Beetle plans. The work should commence at the ISM's WoW in a couple of weeks, lofting has already taken place and we should have an article on that in a day or so from one of my companions or guest editors in this endeavor, Wen Byar. Hope you enjoy this!